This post is approximately 550 words, and the first one I’ve written since August 31. For shame.

You know the old nightmare: the one where you’re standing in front of the class completely naked. That’s a doozy, right? 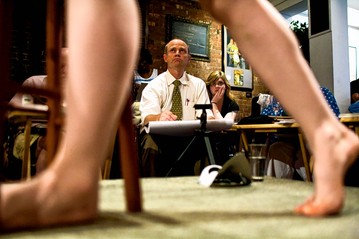 I’ve often told friends I’d rather be naked in a crowd than share my writing. To their relief, I choose the latter. But it’s a similar fear: the thought of exposing your very real self, the part that almost no one ever sees. As a writer – and I’ve heard similar things from other aspiring novelists – I’m often in my head, examining and re-examining every single word that comes out, dreading that I’ve created something awful. That all the imperfections are spotlight-worthy. Perhaps unfairly so, but c’est la vie.

It’s paradoxical, right? You’re working on a book you want people to read, yet you’re scared of showing it to anyone. For me, I want a million people to read my book. Ambitious, optimistic, crazy? Yes to all the above. But I’ve got to show it to one person first. And hoo boy, that’s the painful struggle.

Here’s where I say two obvious things, but they’re a necessary transition to the second half of this post: It’s not a fear that they’ll see something they like; it’s a fear of rejection. The latter of which is a painful experience to anyone who’s revealed something very personal and found themselves subsequently rebuffed.

For an aspiring novelist, it’s going to happen. It SHOULD happen. Regularly and painfully. Not because it’s a rite of passage (though it is), but because you need brutally honest feedback and rejection to ensure that anything you’re delivering to readers is your absolute best.

I shared the opening two chapters with some trusted readers. The first – as it always will be – was my wife. And while I’ve known her for more than 20 years, I still get nervous sharing with her. I anxiously listened from the other room, waiting to hear sounds of exasperation or other derisive sounds that clearly indicated she was wasting her time and had obviously married the wrong man.

I survived her feedback and scraped out a smidge of self-esteem, which was just enough to encourage me to share with some other trusted readers. All told, the feedback was largely positive, which is a wonderful feeling. It really is.

I’m only going to share some of the positive notes because the purpose of this post is to be inspiring – to you and to me. Besides, it’s my blog and I can manipulate things how I want.

“You’ve done a great job of creating a convincing world, with just enough description to make me feel like I’m there.”

“The characters were believable…and enjoyable to read.”

“Your descriptions not only set the scene, but do it naturally in a way that also drives the narrative forward.”

So, two chapters down and about twenty-five to go. This time, I got off lucky, though my fortune was helped by an inordinate number of re-writes. Next time, things will be tougher because the plot (don’t use the cliché , don’t use the cliché) thickens (darn it). Soon I’ll have to share again.

Here’s to not getting naked.

4 thoughts on “That time I shared my writing #1”