In April, my colleagues Christi and Michael were discussing Hero Forge, a website that allows you to design your own gaming miniature and have it 3D-printed. Being a Warhammer fan, the conversation put me into nerd overdrive. Design my own character and hold it in my hand? Gaming nirvana, my friends.

To be honest, I enjoy gluing, painting, and basing Warhammer miniatures more than the game itself. In some future post, I’ll write about the similarities between the painting and writing processes. But I digress.

As I spent hours designing fun figures, it occurred to me that I could bring my novel’s main character, Tildy, to life. Imagine having your own character sitting on your desk, thought-made-real. But not just one! Oh man, the possibilities are nearly endless. I wrote briefly about it here.

It’s been said that one of the smartest things George Lucas did was to retain the merchandising rights to Star Wars. I mean, $20 billion feels pretty smart, right? I’ll not pretend to be Mr. Lucas or predict a merchandising empire, but now I know what it’s like to hold that first figure. To see a concept in your head become a reality. To hold up your hero to someone and say, “I’d like to introduce you to Luke Skywalker!” 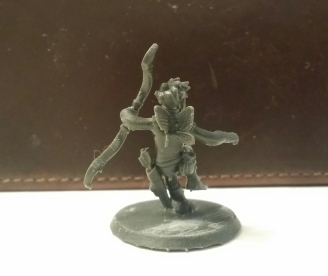 Say hello to Tildy. Sure, she’s colorless and the detail is hard to make out, but she’s much like the first draft of a book in that regard. Soon, I’ll paint and highlight the figure and put her on a flying stand. At the same time, I’ll be adding layers of character detail to the manuscript. And as clear as her features are in my head, there’s something to be said about having the visual reference, to be able to spin her around and upside-down, thinking about how to write her from every angle.

One thought on “Bring Your Character To Life…Literally”