This post is approximately 550 words. Most of them from more than a year ago.

Not a week passes where I don’t see a meme or social post chastising writers who aren’t writing. Sometimes I think, “Yes, thanks!” and others, “I can’t look at that damned manuscript for more minute.”

I found this unfinished post and thought I’d share. It captures my thoughts from a time when I’d been struggling with the work of writing, yet I felt like I was climbing out of the rut. Since those times are safely in the rear-view, I thought this post would be a nice reassurance for writers in ruts of their own.

I’ve discovered that longer and longer breaks are occurring between writing attempts. The fear is that eventually, there will be no more attempts. For someone who enjoys writing as much as I do, this is, of course, unacceptable.

We all have personal responsibilities or weights that drag us down or roadblocks in our way. I started identifying a few of mine. I’ve had a diminishing community of writing people around me. My friend and one-time collaborator has given up writing to focus on a different enterprise. I’m no longer engaging with writers on Twitter. My blog has remained dormant. I seem to know fewer people making serious attempts to write on a regular basis. When weighty things force your head toward the ground, it’s difficult to see the sunrise ahead.

But things are changing. Finally. Though I say this feeling surprised at the amount of time that’s passed since I was serious about writing. I’m discovering the hidden talents of coworkers. My wife and son have written intriguing stories this last year. I’m doing more writing at work, allowing me to flex the important parts of my brain whilst shaking off the rust that’s collected on my fingers.

Certainly, you need to write to write. It’s a stupidly obvious statement. But it is true. The more you write, the more you can write (he says, making another stupidly obvious and trite statement). And to accompany that, you need to surround yourself with discussions about writing, about creation, about art. You need read and read and read. And read some more. You need to create an environment for yourself where, even when you’re not writing, you’re writing. When done correctly, I’ve found the ideas flowed like exhaled breath to the page, effortless and natural.

So, all of that said (he says, using a terrible segue and allowing for another parenthetical aside), I come to the inspiration of this post. I love to hear writers talking about writing. I consume every word as a morsel of inspiration. Last summer, I read a blog post by one of the writers of Community, in which he tells an expletive-laced story about going to write for the show. I can boil it down to “writing is re-writing”, but that’s not as much fun to read, if you like vulgarity.

It usually gets better. It sometimes gets worse. But you guarantee the latter when you’re not sitting down to write. Which result do you prefer?

Apologies for the distraction. Get back to writing, you! 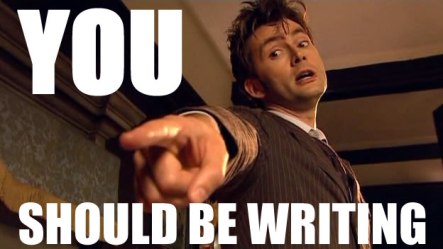